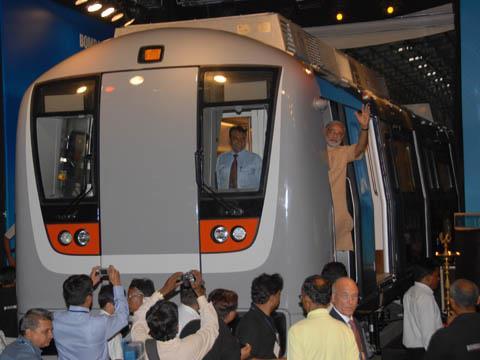 INDIA: The Chief Minister of Gujarat and the Managing Director of Delhi Metro Rail Corp were among the 250 guests who celebrated the roll out of the first Movia metro car to be built in India on June 5.

Bombardier Transportation has invested €33m constructing a factory at Savli in the Vadodara district of Gujarat. It was inaugurated last November, and Bombardier says it is the first such plant in India to be wholly-owned by a global foreign company. It is based on the Görlitz plant in eastern Germany, and has modern facilities including robotic spot-welding.

'Bombardier Transportation has done commendable work by rolling out its first train from India within eight months after the establishment of its factory here', said Dr E Sreedharan, Managing Director of DMRC. 'Bombardier's Savli factory is a big step in achieving self-reliance and indigenisation of metro coaches in the country.'

Bombardier has received orders for a total of 3 550 Movia cars worldwide, including 424 for the second phase of the Delhi metro. The first 36 of the Delhi cars are being built in Germany, the rest at Savli.

'Today, the Movia becomes an Indian vehicle, ready to serve the Indian market and those in the surrounding area', said Stephane Rambaud Measson, President of the Passengers Division at Bombardier Transportation. 'Following the success of the Delhi Metro Phase 2 Project, Bombardier is actively pursuing other metro projects in this region, and the Savli site will serve these future orders as well.'