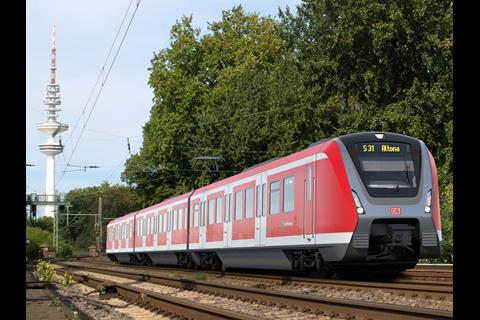 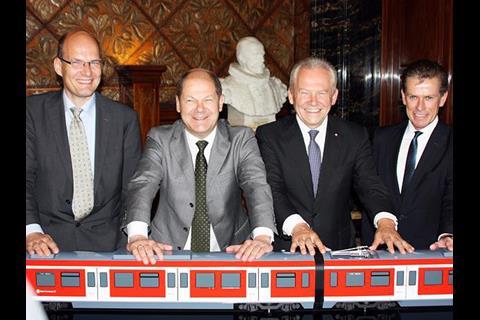 GERMANY: The Hamburg senate has awarded incumbent S-Bahn Hamburg GmbH a contract to operate the city's S-Bahn services for a further 15 years from December 9 2018, enabling the DB Regio subsidiary to place a order for new trains as part of €450m package which includes train refurbishment and depot modernisation.

Under the rolling stock contract which was awarded through a European tender and announced on June 28, Bombardier Transportation is to supply 60 single and dual-voltage three-car electric multiple-units worth €327m, with an option for up to 86 more.

As well as 100 km/h trains for use on the 1 200 V DC third rail routes, the order includes four dual-voltage units which will be able to operate at up to 140 km/h on suburban lines electrified at the German main line standard of 15 kV 16·7 Hz.

Bombardier said the EMUs would have a 'striking and dynamic exterior design'. They will have three twin-leaf doors per coach side, with wide entrances and aisles to facilitate rapid passenger flow into the 'transparent and passenger friendly interior'. There will be a multi-purpose area with space for two wheelchairs, prams, bikes or large luggage. Real-time passenger information will give details of connecting services. There will be a 'compact' air-conditioning system, and waste heat from the traction equipment will be used to heat the passenger saloon.

Design and assembly of the trains will take place at Bombardier's Hennigsdorf plant, with bogies supplied from Siegen. The first eight units are scheduled to be delivered by the end of 2016 for a 40-week test programme. Series deliveries will then run to the fourth quarter of 2018. The operating contract includes provision for the new trains to be sold on any future operator, should DB not win the next operating contract starting in 2033.