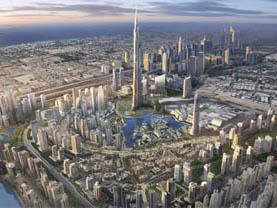 UAE: Emaar Properties has announced plans for a peoplemover and 4·6 km tramway to link the Dubai metro to its 73bn dirham Burj Dubai mixed-use development of 30 000 homes, nine hotels and 350 00 m2 of retail space.

The transport plan announced on April 23 is costed at 500m dirham. The first phase will be a 1·1 km double-track driverless shuttle between Burj Place metro station and Dubai Mall, with an intermediate stop serving a hotel development. Opening is planned for the end of 2009, with cars running every 1 to 2 min.

Phase 2 will add a 4·6 km single-track loop from Burj Place station, linking 10 stops within the 500-acre Burj Dubai development which will include the world's tallest building. The standard gauge line is scheduled to be fully operational in 2010, with low-floor trams running clockwise around the loop. It will be elevated from Burj Place to Burj Dubai Boulevard, where it will use the central reservation.

'Transportation is universally regarded as the top mega-city infrastructure challenge, which also has the biggest impact on any project's competitiveness', said Mohamed Ali Alabbar, Chairman of Emaar Properties. 'The Downtown Burj Dubai Tram System has been conceptualised to address the huge demand anticipated on the traffic infrastructure within the project. As a mass transit means, the tram system is also environmentally viable and can deliver sustainable solutions for the long-term'.