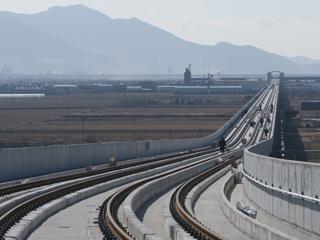 Starting at Sasang station in Busan, the 23·5 km line runs entirely on viaduct via Gimhae International Airport to Kaya University in Gimhae, with 21 stations. The groundbreaking ceremony was held in February 2006, and the line was built by Hyundai Development and POSCO Construction with Systra as project manager.

The line is operated by Seoul Metro, using 50 aluminium-bodied Hyundai Rotem metro cars formed as two-car sets with capacity for up to 300 passengers. Hyundai Rotem was also responsible for the 750 V DC electrical and mechanical systems, while Thales supplied signalling.