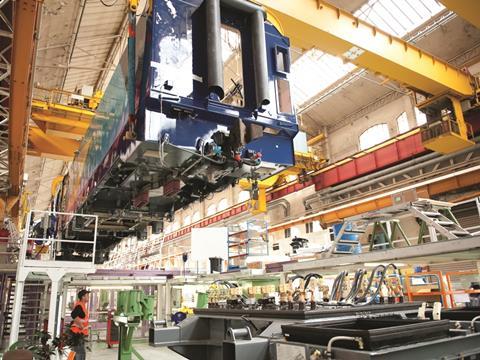 FRANCE: Timescales for the government-backed rescue package for Alstom's Belfort plant which had been announced on October 4 were given by Secretary of State for Industry Christophe Sirugue and Alstom Chairman & CEO Henri Poupart-Lafarge on November 28.

This followed the first meeting of a monitoring committee which was formed to bring together the state, Alstom management, trade unions and elected representatives from Belfort and the Bourgogne-Franche-Comté region.

On September 7 Alstom had announced that it intended to cease locomotive production in Belfort by the end of 2018, transferring assembly work to the Reichshoffen plant and leaving just a small maintenance business in Belfort. This led to political controversy and the agreement of a state-backed rescue plan.

Diversification of the Belfort site's activities has now begun, with Alstom investing €1m in a TGV trainset maintenance building, with financial support from local and national government. This is expected to employ 20 people in 2017.

The government has also committed €4m to support a €30m programme to develop a new range of locomotives. The ‘TGV of the Future’ programme with SNCF is also continuing to make progress.

A committee bringing together local politicians, unions, Alstom and the government is to be set up under the authority of the Préfet of Belfort to provide a forum for discussion and monitoring of the commitments to keeping the Belfort plan operational.

'The commitments made by Alstom on 4 October have made good progress', said Poupart-Lafarge after the November 28 meeting. 'Investments have begun both for new service infrastructure and development programmes for rail vehicles of the future. We note with interest the clarifications made regarding the order schedule, which should ensure the continuity of industrial production at Belfort, La Rochelle and Reichshoffen.’