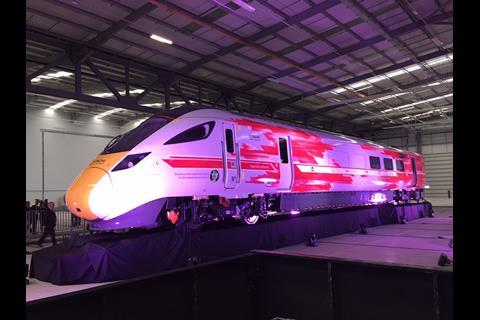 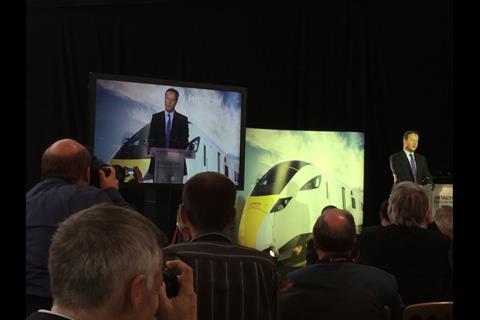 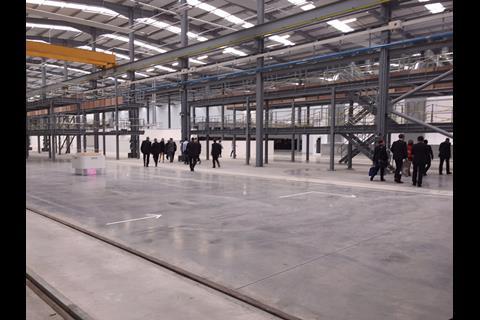 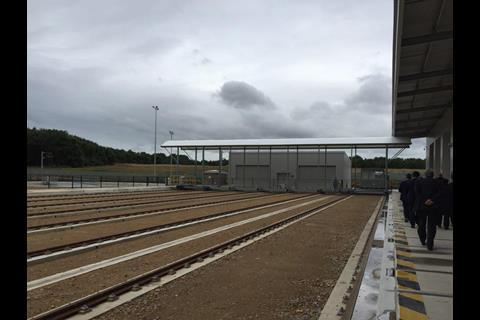 The plant will produce the Class 800/801 trainsets ordered under the government’s Intercity Express Programme, and AT200 commuter electric multiple-units for use in Scotland.

‘Today is a momentous occasion for Hitachi Rail, Newton Aycliffe and the British rail industry’, said Hitachi Ltd Chairman & CEO Hiroaki Nakanishi. ‘We have brought train design and manufacturing back home to its birthplace in the Northeast. In our world-class facility we will combine the best of Japanese technology with the best of British manufacturing to make the best trains for Britain and the world.

‘It is our culture as a business to take a long-term view in everything we do’, he continued. ‘From our investment here in Newton Aycliffe, to our network of new train maintenance centres across the UK, to our ongoing work in building a strong regional supply chain, Hitachi is here to stay.’

Global CEO, Hitachi Rail Europe, Alistair Dormer said the plant now has around 100 staff, including 15 in the design team working on the AT200 interior and other projects. In November work will begin to assemble two Class 800 IEP cars, which will be undertaken more slowly than with the series build to ensure that the local teams are equipped to meet the required quality standards. ‘We have to ramp up quickly though’, Dormer told Railway Gazette. The company envisages having 400 staff by the end of March 2016, and more thereafter.

Bodyshell assembly will continue to be undertaken in Japan, but more design work will move to the UK. Dormer said technology transfer is ‘always a debate between commercial teams and engineers’, and ‘we feel that in this case the engineers have won. It is not a pop-up factory; it will be here for a very long time.’

Managing Director of Hitachi Rail Europe, Karen Boswell, said Newton Aycliffe would be ‘the engine room driving Hitachi Rail's future growth across the UK and into Europe’, and she was ‘proud to lead a company committed to making the Northeast a rail manufacturing centre of excellence once again.’

Prime Minister David Cameron said he was ‘delighted that Hitachi has chosen Northeast England for its first new rail factory outside Japan’, saying that it ‘marks an important step in our efforts to transform our infrastructure, and it raises the prospect of thousands of jobs being created in the local supply chain.’