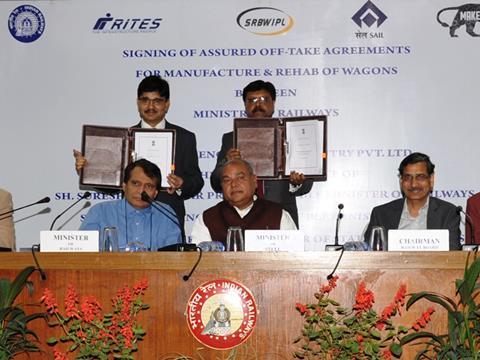 INDIA: Indian Railways has signed agreements worth Rs25bn for the SAIL-RITES Bengal Wagon Industry joint venture to supply 1 200 stainless steel wagons and refurbish 300 existing wagons every year for the next 10 years.

The two agreements will enable production to start shortly at a Rs1·2bn factory at Kulti in West Bengal which has been built by the SRBWIPL 50:50 joint venture of the Ministry of Railways’ RITES consultancy and the Ministry of Steel’s SAIL.

The project was announced in 2010-11. SAIL provided the land and RITES was responsible for constructing the factory and procuring ‘state-of-the-art’ manufacturing equipment. SRBWIPL is expected to employ between 400 and 500 people, and support the development of ancillary industries in the area.

Speaking at the signing ceremony on November 24, Minister of Railways Suresh Prabhu said the assured take-off agreements were ‘a very significant landmark’ for the two ministries. He said the factory would support the government’s ‘Make in India’ initiative, and he hoped it would become a centre of excellence for the development and manufacturing of special purpose wagons for the domestic and international markets. IR should also consider using aluminium wagons, Prabhu added.