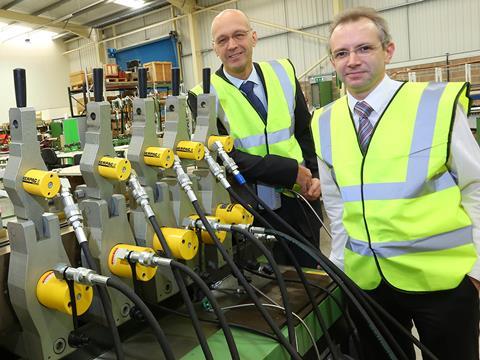 Houghton International is to expand into a new operations facility and invest in machinery to handle the workload arising from a two-year contract to overhaul and repair 108 traction alternators for Great Western Railway’s IC125 fleet. Having seen ‘a steady growth in business’, the Houghton plans increase turnover to £20m by 2020, take on 150 new employees, invest £2m in R&D and expand its manufacturing space.

On March 10 DB announced that it had signed a letter of intent which could see Quantum Capital Partners AG take over the Eberwalde wagon works from January 1 2017. Quantum would pay a nominal €1 and take on around 210 of the 325 employees. 'I am optimistic that after long and intensive talks we have found a good approach which reflects the interests of our employees', said DB CEO Rüdiger Grube.

VolkerRail officially opened a newly-built head office in Doncaster on March 11. Eagre House at the Wrights Business Park is larger than the previous building, and allows head office staff to be adjacent to the overhead line electrification training facility.

On March 11 Vossloh said it was ‘reviewing’ and ‘considering possible further steps’ in relation to a fine notice issued to the turnout manufacturer Vossloh Laeis by the German Federal Cartel Office as a result of anticompetitive agreements in 2001-11. Vossloh said the fine took into account the subsidiary’s co-operation with the investigation and ‘since 2011 strict compliance guidelines are applied group-wide’.

Chicago has been chosen as the lead office for GE Transportation’s Digital Solutions business.

Deuta-Werke is to open a technical office in Berlin.