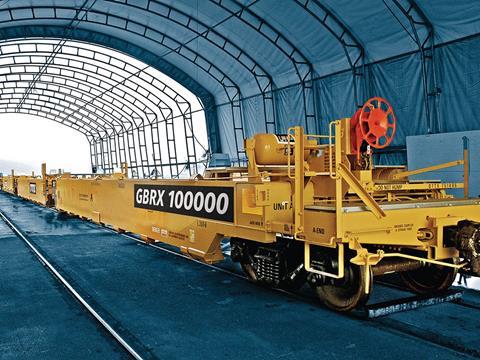 The Greenbrier Companies has rolled outs its 100 000th double-stack intermodal wagon unit at its Gunderson plant in in Portland, Oregon. Greenbrier said it has built approximately 50% of all intermodal double stack wagons operating globally, and produces nearly twice as many as its closest competitor.

Having become a trading division of ASSA ABLOY with effect from February 1, lock maker Pickersgill-Kaye has announced that it is to open a R&D facility and rail centre of excellence in Leeds. This will act as a design hub for future products, and developing the company's core range of LED train door status indicators, cab door locks and passenger emergency assistance units.

Hitachi Rail Europe has awarded Street CraneXpress a five-year contract to service and repair overhead cranes and handling equipment at its Newton Aycliffe plant in the UK.

The European Bank for Reconstruction & Development is providing bus and rail vehicle manufacturer Bozankaya with a €10m loan to finance expansion of production capacity at its Ankara plant including investment in an automated welding machine. This will support a contract for Bozankaya to act as a subcontractor to Siemens in the production of 22 four-car metro trainsets for Bangkok.

Next month Stadler Service Nederland is to start construction of a depot in Hengelo where it will maintain Flirt3 EMUs ordered by Syntus under a contract which includes 15 years of servicing.