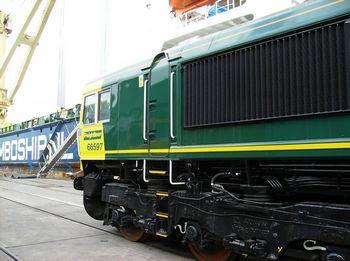 UK: A study commissioned from Ricardo and TRL by the Department for Transport has proposed a variety of upgrades to improve the fuel efficiency of diesel multiple-units and EMD Class 66 locomotives.

While containing little that is new in technology terms, the report strengthens the business case for including efficiency upgrades within potential life-extension programmes for the 1 590 ex-British Rail DMU vehicles still in use.

The report lists 'technology packages' which could give individual fuel savings of between £5m and £15m a year. These range from modern turbocharger designs to the replacement of hydrodynamic transmissions with multi-speed gearboxes, already being trialled by South West Trains.

The report also proposes a technology package for the 450 EMD Class 66 freight locomotives operating in the UK. At an estimated cost of £100 000 per locomotive, Ricardo claims this could save £53m a year in fuel.

Central to the saving is a reduction in idling which is responsible for up to 41% of fuel burned in the freight duty cycle. Ricardo's proposal is based on a stop/start system using lead-acid batteries. Stop/start is a feature of modern road vehicles, with engines stopping when the car is at rest, and restarting automatically when the accelerator is depressed. Freight locomotives can spend long periods stationary, making stop/start particularly effective. vA small 30 kW generator would be fitted to provide power for cab heating and air-conditioning when the engine was shut down.

While Ricardo found 'limited' scope for improving the EMD 710 power plant, the recommended Class 66 technology package would also include an upgraded compressor stage in the turbocharger, an upgraded charge air cooler and cooling system, plus remapping the controller positions to the most efficient engine operating points.

Ricardo puts the development cost for the Class 66 upgrade at £3m. It could be implemented in two years, and at current fuel prices would pay for itself in 10 months.