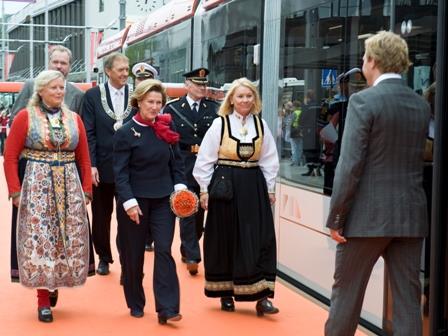 NORWAY: A fanfare by Bergen’s FMKV Military Band greeted the inauguration of the city’s first tram line by Queen Sonja on June 22.

Accompanied by government ministers, the Queen travelled on one of the fleet of 18 orange and white Variobahn trams from Nesttun to Kaigaten, where she alighted and cut an orange ribbon at Festplassen. The Bybanen line was formally handed over to Hordaland County Council which is responsible for public transport services in the region.

A programme of events was organised by the city to celebrate the opening of the 9·8 km line, which runs from the city centre to Nesttun. Passenger operations started at 13.00 with departures every 30 min and free rides until midnight.

‘Light rail will be the backbone of public transport in Bergen, and become an attraction rather than just a means of transport’, said Torill Selsvold Nyborg, chairman of Hordaland County Council. ‘I hope that more people will now leave the car and use public transport.’