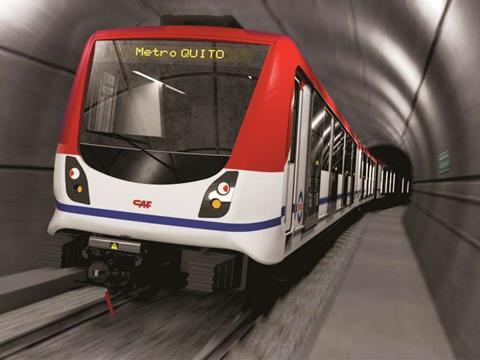 ECUADOR: CAF is to supply 18 six-car trainsets to operate on the first line of the Quito metro. The announcement of the US$183m order on July 15 follows the signing of a credit agreement between Spain’s Instituto de Crédito Oficial and Ecuador’s Ministry of Finance which covers funding of the rolling stock and depot equipment.

With a maximum speed of 100 km/h, the trainsets will be more than 109 m long, with four doors per car side and capacity for 1 500 passengers. They will be stabled at a depot at Quitumbe at the southern end of Line 1, which will also be the location of the control centre.

Construction of the city’s first metro line officially began on January 19. The 22 km north-south route will connect El Labrador and Quitumbe with 15 stations. The end-to-end journey time is expected to be 34 min and around 400 000 passengers per day are forecast to use the line once it opens in 2019.