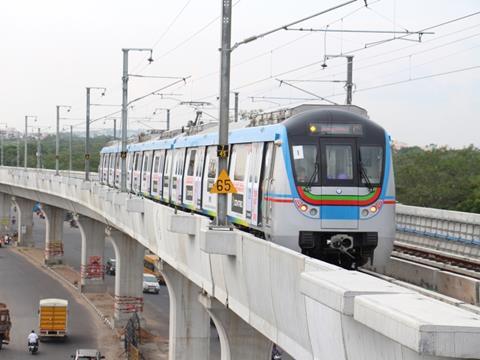 INDIA: Test running in ATO mode under communications-based train control has started on the Hyderabad metro, making it the first application of CBTC in India to go live.

Tests started on December 30 on the 8 km eastern section of Corridor III between Nagole and Mettugunda. The seven-station section is due to open for passengers in March.

Thales has supplied SelTrac CBTC and integrated communications and supervision systems under a contract awarded in 2012. Subsystems include automatic train protection, automatic train supervision, vehicle onboard controllers, zone controllers, a data communication system, and solid state interlocking. Design headways are 90 sec, although initial frequencies would be between 3 and 5 min. Driverless operation with onboard attendants is eventually envisaged.

The main control centre is in Uppal depot. When the full 72 km, three-line network is operational, it will be divided into six control zones.

The elevated metro is being built in six phases under a design, build, finance, operate and transfer PPP concession. Larsen & Toubro Metro Rail (Hyderabad) Ltd is the concessionaire, and Keolis will operate services under a €300m contract running for eight years with an optional three-year extension. Hyundai Rotem is supplying 57 three-car trainsets under an Rs18bn contract signed in 2012. These are designed for a top speed of 80 km/h. Six-car formations are to be introduced at a later stage.

The two new lines now under construction in Delhi will also be equipped with CBTC. Bombardier is supplying its Cityflo 650 equipment for Line 7, while Nippon Signal is equipping Line 8 under a contract awarded in September 2013.