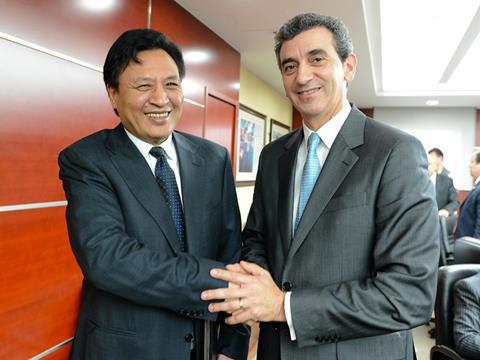 ARGENTINA: Continuing his official visit to China, Minister of the Interior & Transport Florencio Randazzo announced on September 25 that CNR is to supply 27 three-car DMUs for the Belgrano Sur commuter network in Buenos Aires. With contract signature expected within two weeks, deliveries are due to take place in 2015.

Randazzo also announced that on October 1 the government would invite Chinese rolling stock manufacturers to bid to supply a further 32 three-car DMUs for the Sarmiento and Mitre networks. According to the minister, bidders would be asked to provide finance and would be assessed on criteria including the proportion of domestic content.

CNR President Cui Dianguo said the rolling stock manufacturer had for some time been considering undertaking production in Argentina in partnership with a local company. 'We want them to think seriously about locating in Argentina', said Randazzo, 'our government will completely support them and it is great opportunity for them to develop in Latin America.'