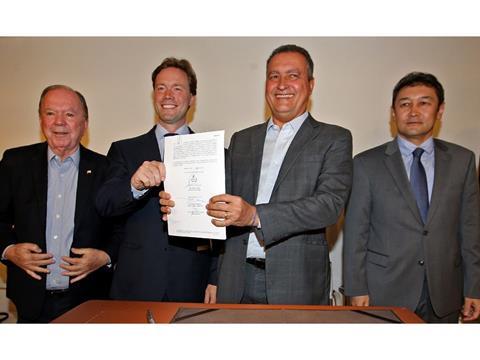 BRAZIL: Plans for a rail-served iron ore mine in the southern part of Bahia state are expected to move ahead, following the signing of agreements for the development of bulk export terminals at the new Porto Sul deep-water facility near Ilhéus and the founding of a special purpose company to take the project forward.

The ironstone reserves at Caetité are being developed by the Bahia Mineração subsidiary of Eurasian Resources Group, under licences awarded in 2011-15. The mine is expected to produce around 20 million tonnes of haematite natural fines and pellet feed a year for 28 years. This would be exported via Porto Sul using a 525 km section of the federal government’s planned East-West Integration Railway.

The 1 572 km FIOL is intended to connect Porto Sul with the Norte-Sul Railway at Figueirópolis, providing an outlet to the Atlantic for agricultural produce and minerals from Tocantins, Goiás and Bahia states. Construction of the east-west line was entrusted to state-owned developer Valec, but was suspended with only two-thirds underway. The government is hoping to auction concessions next year to complete and operate several new railways, including FIOL, following its recent auction of the rights to operate the southern section of the Norte-Sul corridor.

Bahia’s terminal agreement with Bamin and Chinese investors is intended to provide storage and transport capacity at Porto Sul for grain and fertilisers as well as up to 41·5 million tonnes of iron ore per year. Participating in the signing ceremony in Salvador on May 21 were Bahia state Governor Rui Costa, ERG Chief Executive Benedikt Sobotka and Kazakh Ambassador Kairat Sarzhanov, along with State Secretary for Economic Development João Leão and Bahia Mineração Executive Chairman Erik Gaustad.

According to Costa, the state has been looking to attract international investors to support the port, railway and mining developments, which depend on each other. With the necessary environmental licences in place, work on the port is expected to get underway in the second half of 2019, and take around four years at a cost of R$2·5bn.

Explaining that ‘our partnership with the State of Bahia is a strategic one’, Sobotka said the new agreement was ‘an important step in accelerating the development of Porto Sul and ensuring that the right balance is reached between economic development and commercial viability’. Pointing out that the deal was expected to unlock an investment programme totalling more than R$10bn, he added that ERG’s co-operation with Bahia would ‘make an important contribution to the continued development and success of the region’.