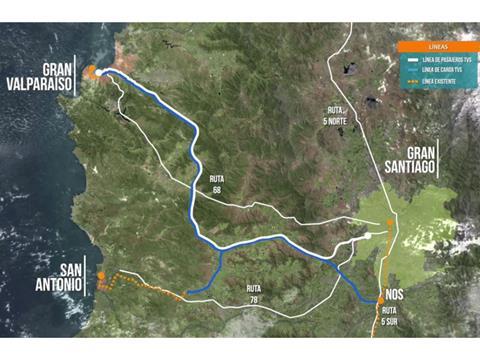 CHILE: Proposals to build a high-performance railway between the capital Santiago and the port of Valparaíso have been formally submitted to the Ministry of Public Works by the Tren Valparaíso Santiago consortium of local firm of Sigdo Koppers and China Railway Engineering Corp.

According to the promoters, the US$2·5bn project could be entirely financed by the private sector. The 127 km line with four stations is to be designed for passenger trains to run at up to 220 km/h, offering an end-to-end journey time of 45 min, around half the time currently taken by road. TVS envisages operating a fleet of 12 trains with capacity to carry up to 890 passengers.

The line would also be suitable for freight trains operating at up to 85 km/h, and TVS CEO Álvaro González told local media that the consortium was looking to carry between 40% and 50% of all import and export traffic handled by the country’s central coast ports. As such, he said the promoters were looking at adding a connection to the port of San Antonio, around 60 km south of Valparaíso.

TVS submitted an initial proposal to the Ministry of Transport last year, but the government ruled in January that the scheme could not be taken forward under the country’s Railway Law. It said the scheme would have to be resubmitted under the public works concession process.

If the Ministry of Public Works finds that the proposal is in the public interest, it would authorise TVS to undertake detailed feasibility studies, including demand and environmental assessments. The ministry would then have a year in which to put the project out to tender as a concession. Other companies expressing interest reportedly include Italy’s FS Group and international construction group Salini-Impregilo.

According to González, President Sebastián Piñera indicated last year that he hoped the project could be tendered in 2019.