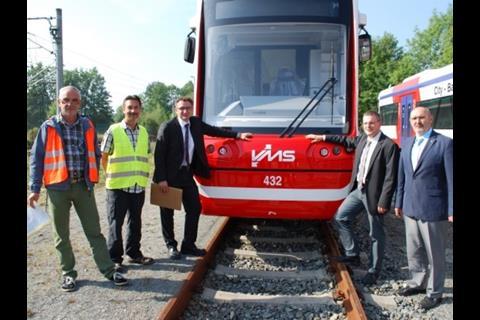 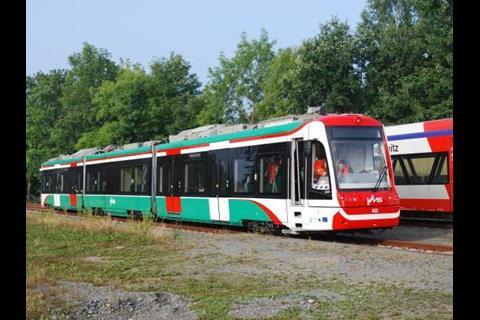 GERMANY: The first Vossloh CityLink electro-diesel tram-train for Chemnitz was presented to transport authority Verkehrsverbund Mittelsachsen on August 21. The second vehicle is currently at the Wildenrath test track.

In 2012 Vossloh won a €42·3m contract to supply eight tram-trains for the network being developed around Chemnitz. This was followed by a €23·7m order for four more earlier this year.

The tram-train is 37·2 m long and 2 650 mm wide. It has two entrance heights, with a mix of steps and ramps to suit the interior floor arrangement. Vossloh Rail Vehicles is providing the welded Duplex steel body shells, bogies and interior fittings, and Vossloh Kiepe is supplying the traction and control equipment and air-conditioning. In addition to the 600 V DC inverters, the vehicle has an MTU Powerpack with Stage IIIB-compliant 6H1800 water-cooled diesel engine rated at 390 kW. The car can reach a maximum speed of 100 km/h.

The tram-trains will operate from the existing tram network’s 600 V and 750 V DC overhead electrification, changing to diesel to reach Burgstädt, Mittweida and Hainichen along railway lines. These three routes form the first stage of a project to develop 226 route-km of light rail by 2020.