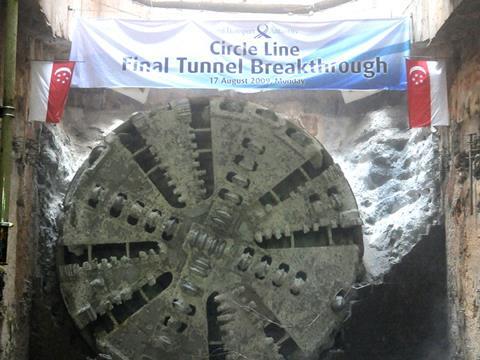 SINGAPORE: Tunnelling works for the Circle Line were completed on August 17, with the break-through of a tunnel boring machine into Farrer Road Station.

Tunnelling on the last stretch, known as Stage 4, comprised four drives. Two drives from One-North to Haw Par Villa were completed in February 2008. The remaining two from One-North to Farrer Road had to contend with historic, commercial and residential structures above ground and a variety of geological conditions below, described by the Land Transport Authority as ‘extremely fine and soft soil, weathered rock and exceptionally strong granite’. A slurry TBM was used to cope with these conditions.

Five stations between Bartley and Marymount opened on May 28. Of the remaining 24 stations still under construction, Kim Chuan depot and five stations on Stages 1 and 2- Dhoby Ghaut, Bras Basah, Esplanade, Promenade and Tai Seng - have been granted a Temporary Occupation Permit. About 76% of the track has been completed, and all 40 trains have been delivered.

The other six stations on this section, between Nicoll Highway and MacPherson, are on schedule to obtain TOP status by the end of 2009. Electrical and mechanical works are 97% complete and final testing and commissioning is underway.

Stages 4 and 5 from Marymount to Harbour Front consist of 13 stations. Six stations at Farrer Road, Botanic Gardens, Kent Ridge, One-North, Telok Blangah and Harbour Front have achieved Basic Structure Completion, and architectural and E&M works have commenced. Caldecott, Buona Vista, Pasir Panjang, Labrador Park and Haw Par Villa are on schedule to attain BSC by the end of the year. Structural works at Holland Village have also been substantially completed.

‘The CCL project is on schedule and revenue services for the remaining stations will commence progressively from 2010 onwards,’ said LTA Chief Executive Yam Ah Mee.

Read more about Circle Line in the September issue of Metro Report International.