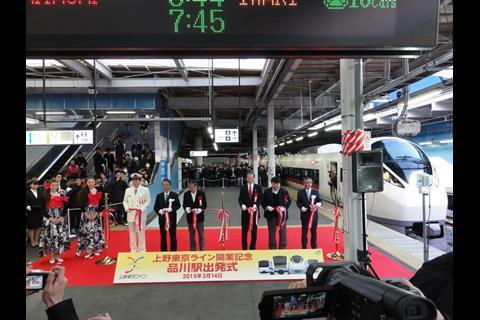 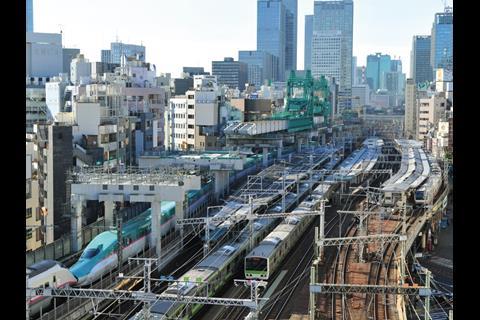 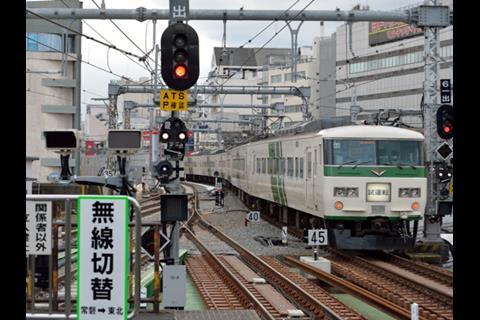 Taking seven years to build at a cost of ¥40bn, the 3·8 km cross-city link provides an extra pair of tracks for suburban services on the busy north-south corridor connecting the capital’s two principal rail hubs. Trains from the north which previously terminated at Ueno have been linked up with services from Tokyo station to the south. Eliminating the need to change trains has cut typical journey times for passengers from the northern suburbs to the central business district by around 11 min.

The elevated double-track suburban line uses the alignment of the former Tohoku Main Line tracks, which were lifted in the 1980s to make way for the extension of the Tohoku Shinkansen from Ueno to Tokyo. Over the 1·3 km between Akihabara and Tokyo stations, the new 1 067 mm gauge tracks are carried over the 1 435 mm gauge Shinkansen on a 19-span double-deck viaduct; this was built in 3½ h overnight possessions to avoid any disruption to regular services.

JR East is initially operating an all-day service of 15 trains/h each way over the Ueno-Tokyo Line, reducing the peak-hour crowding on trains using the parallel Yamanote Loop and Keihin-Tohoku Line from 213% to around 180%. Five trains per hour from the Utsonomiya Line and five from the Takasaki Line now run through over the Tokaido Main Line to Yokohama, while five limited express trains from the Joban Line have been extended from Ueno to a new turnback facility at Shinagawa.

From 2016, JR East expects to increase the cross-city service to 20 trains/h; in the longer term some of these trains may be extended over a proposed branch to Haneda Airport.

• Read more about the construction of the Ueno-Tokyo Line in the April 2015 issue of Railway Gazette International.