Croydon tram on test in Chemnitz 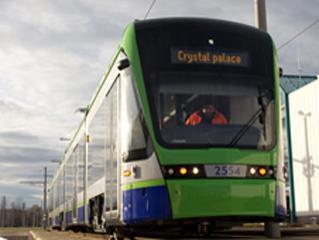 UK: The first of six Stadler Variobahn trams ordered to increase capacity on the Tramlink network in south London underwent testing in the German city of Chemnitz during December.

Stadler won its first UK contract in August 2011, when Transport for London announced a £16·3m order for six Variobahn trams with an option for eight more. They are being built by Stadler Pankow in Berlin, with delivery now planned to start in mid-January, when driver training will begin. All six will be delivered by the spring of 2012.

To speed delivery, three of the six trams are being diverted from an order for five placed by Bergen's Bybanen, with Tramlink 2554 which was on test in Chemnitz originally destined to become Bergen 215.

The 100% low-floor bi-directional air-conditioned trams will have five sections giving a total length of 32 370 mm. They will be 2 650 mm wide, with a maximum floor height of 385 mm and space for 72 seated and 134 standing passengers. Top speed will be 80 km/h.

When they enter service alongside Tramlink's existing fleet of 24 Bombardier CR4000 cars, the Stadler vehicles will allow a more frequent service to be operated between Therapia Lane and Elmers End, increasing capacity on the busiest part of the Tramlink network through central Croydon.