Deadlines extended as Caltrain seeks to save electrification programme 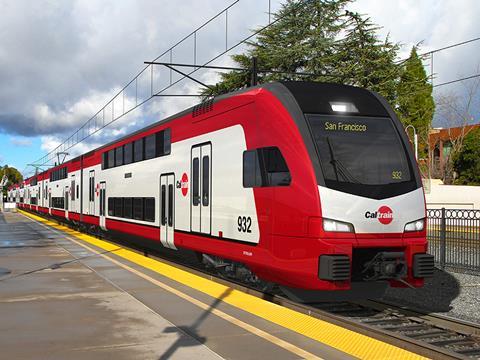 USA: San Francisco to San Jose commuter operator Caltrain announced on February 27 that it had reached agreement with contractors Balfour Beatty and Stadler to extend the contractual deadlines for start of work on the Peninsula Corridor Electrification Project.

Caltrain had been expected to issue ‘Notice to Proceed’ for both contracts by March 1, subject to confirmation of federal funding for the work. The delay to June 30 is designed to allow a decision to be made by the Federal Transit Administration on implementation of a $647m funding agreement. On February 17, FTA had announced that execution of the grant would be delayed until President Trump finalises his budget proposal to Congress.

The operator says further extensions to the contractual deadline are unlikely to be possible, and additional delay to approving the FTA grant would be tantamount to rejection of the grant.

Caltrain says that the contractual extension is likely to incur costs of up to $20m in project contingency. The operator says it has been working with FTA since 2009 to ensure that the project ‘meets all of the rigorous statutory and regulatory requirements’ for federal funding, which makes up only 32% of the total project cost.

‘Every project that has achieved these milestones has received an executed Full Funding Grant Agreement and we don’t expect that this project will be any different’, said Caltrain Executive Director Jim Hartnett. ‘Caltrain’s contractors have demonstrated their commitment to preserving this unique opportunity to deliver unprecedented improvements to an aging commuter rail system that serves 65 000 riders every day.’

In September 2016, Caltrain awarded contracts worth $1·3bn in total to Balfour Beatty for electrification of its 82 route-km corridor, and to Stadler for the supply of 16 six-car EMUs.

‘This project will also be the driving force for the creation of a new railcar production facility in the US, that will employ several hundred workers’, said Martin Ritter, Stadler US CEO. ‘We are excited to keep this project moving forward and appreciate the partnerships with the federal and local investors to ensure that this project, the jobs and plans to build a new facility are realised.’