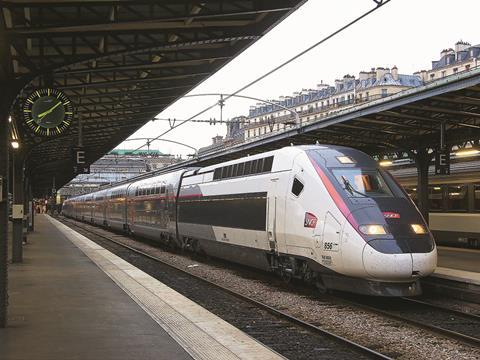 FRANCE: Announcing its results for 2017 on February 27, SNCF Group reported revenue of €33∙5bn, up 4∙2% on the year before ‘thanks to commercial momentum’ driving strong growth in passenger and freight traffic. Combined with ‘strict financial discipline’ and a cost-cutting programme that generated €830m of savings in 2017, this saw EBITDA increase by 16% to reach €4∙6bn. However, this performance remained ‘insufficient’, according to the group, given the structural losses at its infrastructure division SNCF Réseau where net debt grew by 3∙8% year on year to reach a ‘massive’ €46∙6bn.

The ‘transformation’ of train operating division SNCF Mobilités continued during 2017, when ‘its business rebounded as the economy picked up’ and revenue grew by 4∙7% to reach €31∙8bn. Revenue at long-distance passenger business Voyages SNCF was up 8∙6% at €7∙4bn, where revenue from domestic high speed services grew by 8∙7%, Thalys was up by 12∙0% and Eurostar up 8∙1%.

Revenue from Paris commuter services, TER regional services and the Intercités network of conventional long-distance passenger trains was up 2∙5% at €8∙1bn, while freight business SNCF Logistics reported a 3∙1% increase in revenue which reached a total of €10∙2bn in 2017. EBITDA at SNCF Mobilités was up 30% year on year at €2∙8bn.

Revenue at SNCF Réseau was up 0∙9% at €6∙5bn, including €3∙6bn of income from track access charges paid by SNCF Mobilités, up 1∙9% on the year before. Reflecting the opening of three high speed lines and a 2∙1% increase in train-km operated on the national network in 2017, EBITDA at SNCF Réseau was up 1∙6% at €1∙9bn. With a self-financing capacity of €1∙9bn and total investment of €5∙2bn, net debt increased by 3∙8% to reach €46∙6bn.