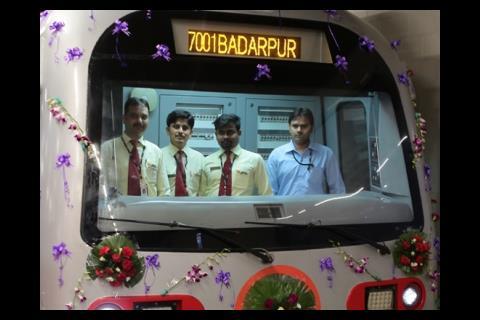 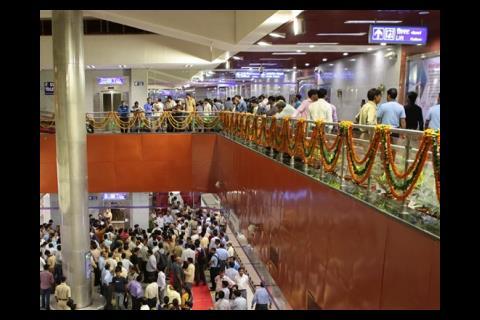 INDIA: The latest extension of the Delhi metro opened on June 8, when the first train from ITO station on Line 6 was flagged off by Urban Development Minister Venkaiah Naidu and Delhi Chief Minister Arvind Kejriwal at 16.00. Revenue services started 2 h later.

Construction of the ITO extension started in April 2012 and was completed in 33 months, seven months ahead of schedule. Testing began on December 18, and ITO station was completed in February.

The new station is expected to serve the large number of office workers in the area, as well as spectators coming to watch football at Ambedkar Stadium and cricket at the Feroz Shah Kotla Ground. According to Delhi Metro Rail Corp, 22 000 passengers per day are expected to use ITO station by 2016, rising to 31 000 in 2021. This is expected to increase fare revenue by about Rs80m per year. Services will serve ITO between 06.00 and 23.35, with an initial peak frequency of 7½ min.

DMRC reports that work on the section between ITO and Kashmere Gate is around 83% complete and the line is on course to open in March 2016. Serving stations at Delhi Gate, Jama Masjid and Red Fort, this section is being tunnelled past the city’s famous Red Fort, gaining approval for which delayed the start of construction.

Line 6 is being extended in both directions as part of Phase III of the metro expansion. Trial runs between Badarpur and Faridabad at the southern end started in April.

A TBM breakthrough at Lajpat Nagar on June 11 marked the completion of one of the twin bore 1·6 km tunnels from South Extension on Line 7. These are the second-longest twin tunnels to be bored on Phase III, slightly behind the 1·7 km Nizamuddin – Ashram bores, also on Line 7. The 5·8 m diameter tunnel reaches a maximum depth of around 21 m. Line 7 is expected to open by the end of 2016.