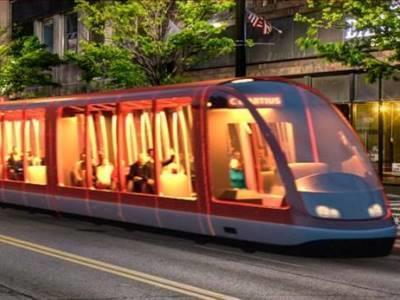 USA: Project promoter M-1 Rail Corp announced on November 3 that it has formally selected Inekon Group of the Czech Republic to supply six 100% low-floor trams for the M-1 line in Detroit. The final contract value is expected around $30m.

The 22 m long bidirectional vehicles would use lithium-ion batteries for 60% off-wire operation on Woodward Avenue and in the depot. They would also be equipped with regenerative braking, air-conditioning, wi-fi and vertical bicycle racks. There would be three doors per side.

As the project is partly funded from federal TIGER grants, the trams must meet Buy America requirements. M-1 Rail Corp says that it is considering several assembly locations in southeast Michigan. ‘Inekon has a strong track record with other streetcar projects in Portland, Seattle, and Washington DC, and owns a 40% share of US-installed projects’, said M-1 Rail Corp Chief Operating Officer Paul Childs.

The trams are expected to run in mixed traffic along the 5·3 km route from 2016. Construction of the line officially started on July 28.