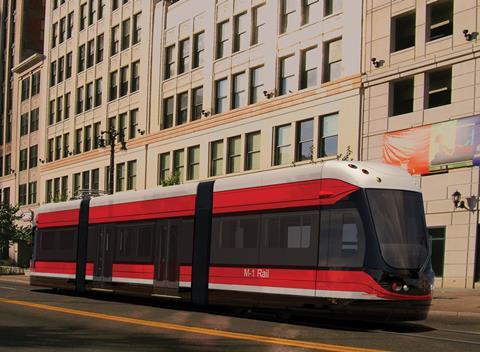 USA: Detroit light rail project promoter M-1 Rail announced on June 8 that it had agreed terms with Brookville Equipment Corp for a $32m order to supply six of Liberty Modern Streetcars for the future Woodward Avenue line. The trams will use lithium-ion batteries for catenary-free operation on around 60% of the 5·3 km route as well as a short spur into the depot.

Deliveries are scheduled to begin in the fourth quarter of 2016. The three-section 70% low-floor cars will be 20·3 m long, with 32 seats and a total capacity of 125 passengers. They will be 2 650 mm wide, compared to the 2 400 mm of two similar cars which Brookville supplied to Dallas earlier this year. Four 99 kW AC traction motors will give a maximum service speed of 56 km/h.

‘We are eager to work in partnership with M-1 Rail to deliver an innovative, service-proven, world-class, American-designed streetcar fleet to the city of Detroit’, said Joel McNeil, Brookville’s Vice-President of Business Development. ‘With off-wire capabilities, low-floor design compliant with the Americans with Disabilities Act and a sleek design, we are confident these vehicles will integrate seamlessly into the city’s existing infrastructure to improve accessibility to major attractions and other local transit systems for residents and visitors’.

M-1 Rail is a non-profit public-private venture which says it is delivering ‘the first major transit project led and funded through collaboration between private businesses and philanthropic organisations working in partnership from the public sector’. Backers include local authorities, the state of Michigan and the federal Department of Transportation.