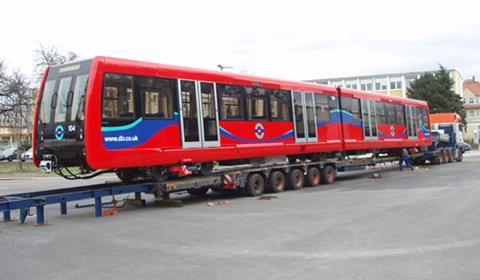 UK: Mayor of London Ken Livingstone is due to formally unveil the first of a new design of trainset for the Docklands Light Railway on March 13.

Transport for London placed a £50m order with Bombardier Transportation for 31 articulated vehicles in June 2006, a continuation of a £45m April 2005 contract for 24 vehicles. TfL is purchasing the new cars using money raised from a £10bn bond package plus funding provided by the Olympic Delivery Authority.

Earlier trains for the driverless light metro were built at Brugge in Belgium, but the latest cars are being assembled at Bombardier's plant at Bautzen in Germany, with electrical equipment supplied from Mannheim and bogies from Siegen.

TfL says the vehicles have a 'sleeker' external design than previous batches, with increased window space. Following testing, the first cars are expected to enter service this spring, with the whole fleet in traffic by late 2009.

The additional cars will increase capacity when the DLR's London City Airport branch is extended 1·8 km from King George V under the River Thames to Woolwich Arsenal on February 28 next year. They will also accommodate increased demand during the 2012 Olympic Games.