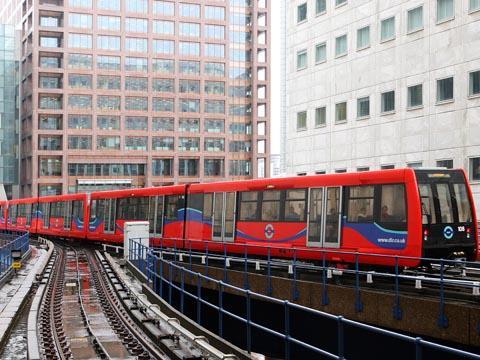 UK: London's Docklands Light Railway ran its first public three-car trains between Bank and Lewisham on February 23. The extended trains will increase capacity on the operator’s busiest route by 50% and will be rolled out across the DLR network as demand increases.

The 30-month £325m project involved extending platforms to accommodate longer trains, and upgrading track and infrastructure, including two new grade-separated junctions at Canary Wharf and Canning Town. Tower Gateway has been remodelled to a single track with two side platforms, and a new double junction has been installed to improve access to both Tower Gateway and Bank. A new station costing £22m was built at South Quay, to replace the former station which was located on a curve, making it difficult to extend the platforms and maintain a safe platform/track interface.

Work is underway on the final stage of the capacity expansion project between Canning Town and Beckton, funding for which was agreed in April 2009. This is due for completion in early 2011.

Bombardier is currently supplying 55 new cars, costing £100m, to supplement the existing fleet of 94 cars. The Olympic Delivery Authority contributed £20m to part-fund the new vehicles, which will transport visitors to key venues during the 2012 Olympic and Paralympic Games.

‘As the Olympics approaches, the DLR has struck gold with a huge 50% increase in capacity – the perfect example of the Olympic legacy already delivering real improvements for Londoners’, said Mayor of London Boris Johnson.