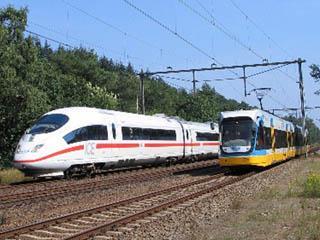 NETHERLANDS: The Dutch tram-train pilot project between Alphen-aan den Rijn and Gouda is expected to end with the December 2009 timetable change, when the current mix of trams and EMUs will be replaced by a strengthened train service.

This follows the signing of an agreement between the province of Zuid-Holland and NS Reizigers on August 6 to extend the existing Rijn-Gouwe operating contract for a further three years, subject to approval by the transport ministry.

From December NS will introduce refurbished Sprinter EMUs on the routes from Alphen to Leiden and Gouda, providing improved peak-hour services and better connections. The six Bombardier A32 light rail cars used on the route since 2003 will become surplus to requirements.