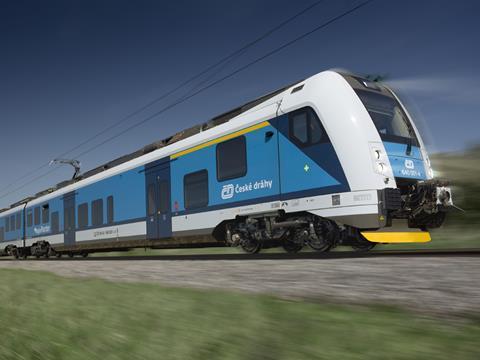 The framework is valid for 48 months and is worth KC1·2bn. It follows from an order for 14 EMUs placed in August 2014 for domestic inter-city services.

The first two trains from the latest order are due to be put into service early next year on regional route S2, which will connect Mosty u Jablunkova to Ostrava-Mošnov Airport from April this year. The Moravskoslezský region has approved a grant of KC89·6m for the purchase.

The 65% low-floor trains will be 52·9 m long with 147 seats, including nine in first class, and will feature air-conditioning, accessible toilets, audio-visual passenger information and wi-fi.

Since late 2012 ČD has operated 19 RegioPanter EMUs, with seven more now under construction for suburban services around Brno.

On February 12 ČD called bids for modernisation of 12 Type Bmto double-deck coaches built by Waggonbau Görlitz in 1976. The work will involve complete refurbishment of the interiors, after which the coaches will be used on Praha suburban services, allowing the withdrawal of Class 451 and 452 EMUs. The estimated value of the 12-month contract is KC120m.