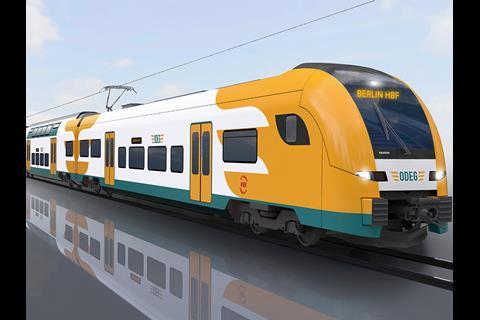 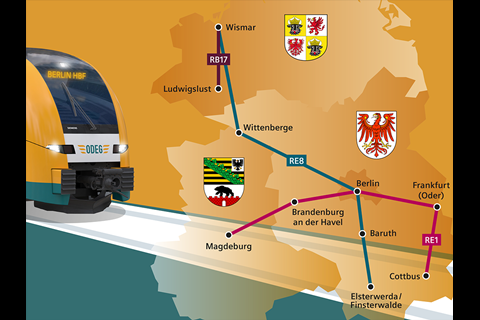 GERMANY: Ostdeutsche Eisenbahn has placed a €300m order for Siemens Mobility to supply 21 six-car and two four-car Desiro HC partly double-deck electric multiple-units. These are to be used on services which ODEG is to operate under Lots 1 and 4 of Elbe-Spree network operating contracts awarded by Berlin-Brandenburg transport authority VBB in January.

The EMUs will be built at the Siemens plant in Krefeld for delivery from mid-2022, ready for the start of the 12-year operating contracts with the December 2022 timetable change.

The six-car EMUs with 637 seats will be used on regional express route RE1 between Magdeburg, Berlin, Frankfurt (Oder) and Cottbus. The four-car EMUs with 400 seats are to be used on service RE8 connecting Wismar, Wittenberge, Berlin Baruth and Elsterwerda/Finsterwalde, as well as on RB17 between Wismar, Schwerin and Ludwigslust.

There is an option to lengthen the EMUs to provide a capacity of 800 seats when platforms on route RE1 are extended.

The EMUs will have spaces for bicycles, pushchairs and wheelchairs, free wi-fi, an accessible toilet and sliding steps for stations with 550 mm or 760 mm platform heights. The doors will be wider than on the existing trains to speed up boarding and alighting, and there will be real-time capacity displays inside and outside with the information also available via the VBB app. Control room staff will be able to access live CCTV images from the trains and communicate with passengers through the public address system.

‘We’ve already started implementing our operating concept for the Elbe-Spree network’, said ODEG Chief Executive Arnulf Schuchmann when the order was confirmed on March 26. ‘In addition to expanding our workshop and training facilities, the trains are a very important part of the concept. They must meet all specifications defined in the transport contract and prove themselves in operation.’