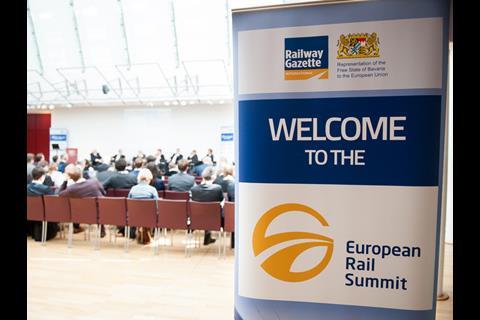 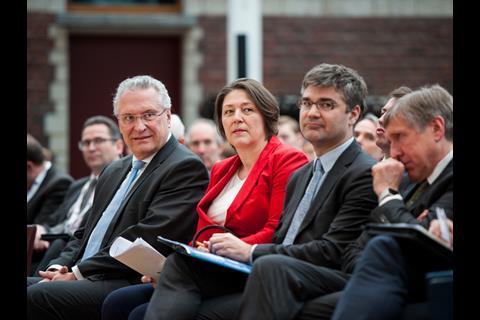 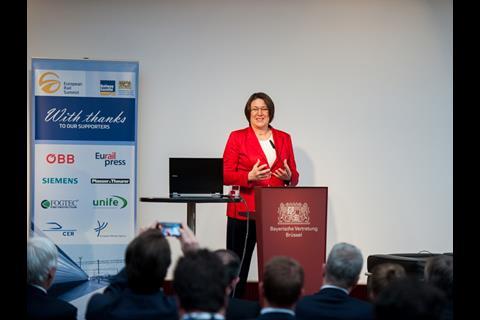 EUROPE: Reaching an audience in excess of 350 people, the second European Rail Summit organised by the Railway Gazette Group took place in Brussels on April 27-28 against a backdrop of legislative progress on various elements of European rail policy.

Featuring keynote addresses by European Transport Commissioner Violeta Bulc and the Interior Building & Transport Minister of the Land of Bayern, Joachim Herrmann, the Summit was hosted at the Representation of the Free State of Bavaria to the EU.

Co-operation and innovation were recurring themes throughout the discussions over the two days, as industry leaders led by CER Executive Director Libor Lochman urged policymakers to complete the adoption of the EU’s Fourth Railway Package before embarking on a period of ‘legislative stability’.

Bulc was one of several speakers to suggest that there should be no need in the short term for ‘more regulation’, but rather better application of existing directives. She set out her six priorities for the rail sector, of which the first was a greater drive towards digitisation of the sector. Reflecting on the market pillar of the Fourth Railway Package, she insisted that ‘the break-up of monopolies would make rail companies more competitive, and stimulate the development of new business models which we have not seen for a very long time’.

A series of thematic round-table discussions accompanies the keynote addresses and impulse speeches, allowing delegates and speakers to explore the policy issues facing the sector in greater depth. Reflecting on the Fourth Railway Package, Henrik Hololei, Director-General of DG Move, insisted that ‘compromises were inevitable’ and that it would not be possible ‘to please everyone’. There had not been enough progress made on shifting freight from road to rail in the past 10 years, he added.

More positively, Leos Novotny, founder of Czech open access passenger operator Leo Express, reported that his company now operated trains and buses to 45 cities in four countries and made a ‘small profit’. Rail could be ‘the backbone of the sharing economy’ he believed, but only if the regulatory climate allowed operators to thrive. He urged policymakers to ‘define the rules of the market’ and then ‘get out of the way and let us go for it’.

Speaking on April 28, Josef Doppelbauer of the European Railway Agency gave a more sobering outlook as he sought to look at the future of the rail sector in broad terms. Noting that ‘Europe’s fragmented market mean that rail struggles to compete with other modes’, he believed that ‘we are still trying to reinvent the wheel many times in parallel’ when it comes to fostering research and innovation.

All of the sessions from the European Rail Summit are now available to watch again free of charge to registered viewers. Simply click the relevant Programme tab for each day.