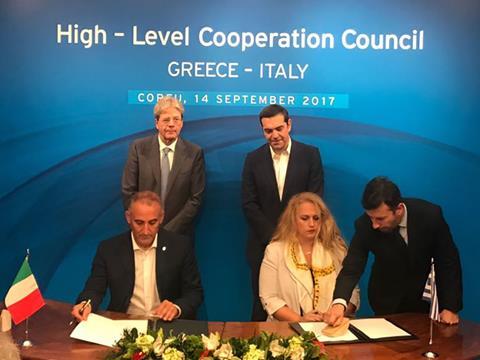 The share purchase agreement was signed on January 18, but completion of the transaction was subject to European Commission approval of financial support packages for the restructuring of Trainose and infrastructure manager OSE.

‘Today's closing is another important step for the international growth of the FS Group, as anticipated in the 2017-26 business plan’, said FS Italiane CEO & Managing Director Renato Mazzoncini after the transaction was completed. ‘The acquisition of Trainose is an opportunity for growth and development for the Greek railways, which from now on can rely on the know-how and experience of the FS Italiane Group.’

FS sees significant potential for developing freight traffic from Greek ports to central Europe. In 2016 Trainose carried 15·6 million passenger-journeys, of which 10·1 million were on suburban services, and 1·1 million tonnes of freight. This generated revenue of €120m and a profit of €3·3m, and FS said Trainose had achieved ‘financial equilibrium’ since 2013. The operator has 672 employees, leases around 1 160 vehicles, and operates around 350 passenger and freight trains per day.

Mazzoncini said FS was ‘evolving into a major European mobility player’, and was ‘already one of the leading operators in the rail passenger and freight market as well as in local public transport. We are first in Italy and Greece, second in Germany, and we also operate with subsidiaries in Great Britain, France and the Netherlands.’

International activities ‘currently account for approximately 15% of revenues, rising to about 17% if considered on an annual basis’, Mazzoncini said, and the target is to for international turnover to grow from €1bn to €4bn by 2026.