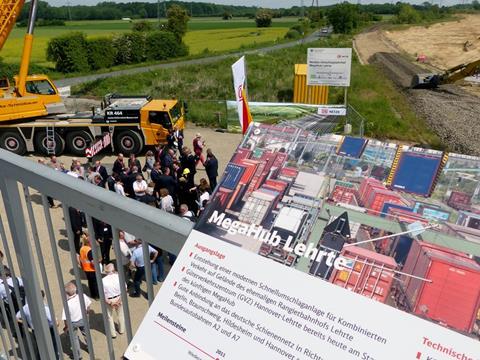 GERMANY: Work to build the automated MegaHub intermodal terminal at Lehrte, about 20 km east of Hannover, was formally launched on May 15. Speaking at a midday ceremony, Parliamentary Secretary of State in the Federal Ministry for Transport & Digital Infrastructure Enak Ferlemann said that the start of work for the Lehrte MegaHub was ‘an important milestone’, noting that ‘intermodal transport is essential to switch traffic to rail and waterways’.

Also present was Niedersachsen Minister for the Economy, Employment, Transport & Digitalisation Dr Bernd Althusmann, who said that ‘there was no better location for the MegaHub’ as it was at the crossroads of north-south and east-west routes. The event was also attended by DB Netz Chairman Prof Dr Dirk Rompf.

Occupying about 120 000 m2 on the site of sidings forming part of the marshalling yard at Lehrte, the MegaHub will have two sets of three 700 m long tracks and three portal cranes for loading and unloading of containers and swap bodies from trains or lorries. Between the two sets of tracks will be an area reserved for automated battery-powered rubber-tyred shuttles that will carry containers and swap bodies between the portal cranes. The terminal is due to be operational by the end of 2019, with the €170m cost met by Deutsche Bahn and the federal government.

The project was first proposed in 1997 and preliminary works began in 2014.

A detailed description of Lehrte MegaHub was published in the September 2014 issue of Railway Gazette International.