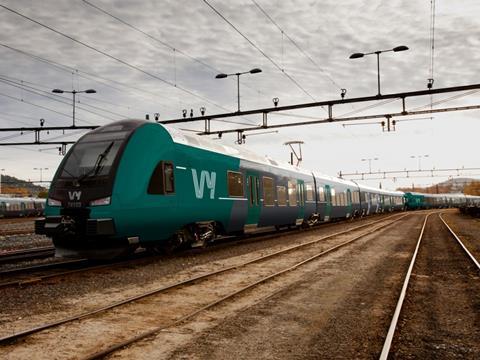 ‘The name Norwegian State Railways no longer adequately expresses what we do’, explained Chairman Dag Mejdell. ‘The NSB Group operates rail and bus services in Norway and Sweden, and owns Norway’s largest bus company, Nettbuss. We are now bringing these closer together, developing new solutions and making it even easier to travel in an environmentally-friendly way. That is why we need a new, shared identity.’

Meaning vista or prospect in Norwegian, Vy can also be used as a metaphor for ambition, and is intended to signal that the group has a vision for the future. The new branding was endorsed by shareholders at an extraordinary general meeting on March 22, and will be rolled out gradually across the group’s passenger businesses, along with new staff uniforms. Freight operator CargoNet will retain its existing name.

Following vertical separation in the 1990s, NSB was restructured as a limited company in 2002. Rolling stock ownership was transferred to leasing company Norske Tog in 2016, and ticket retailing to Entur at the same time, leaving NSB as one of several train operators competing to provide rail services. Last year Go-Ahead Norge won the first operating contract to be competitively tendered by national railway authority Jernbanedirektorate.

Noting that ‘the transport sector is changing rapidly, and we are changing to meet our customers’ new expectations’, CEO Geir Isaksen said the integration of NSB and Nettbuss into Vy would allow the group to offer a door-to-door service, ‘bringing together both our bus and train services, developing new digital solutions and exploring additional means of transport’. Making public transport ‘even more attractive’ would be ‘good for society and the environment’, as well as strengthening the core business, he believed.