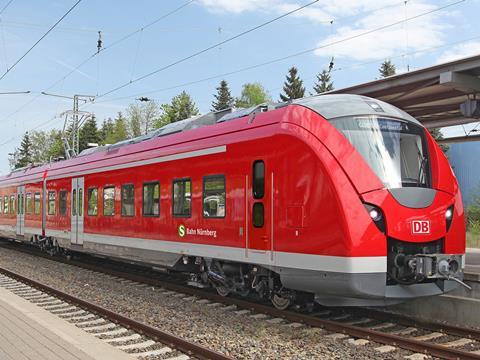 GERMANY: A contract for Alstom to supply 27 four-car Class 1440 Coradia Continental electric multiple-units for use on Nürnberg S-Bahn services was signed by DB Regio Bayern Chairman Hansrüdiger Fritz on March 29.

The units are to be supplied from Alstom’s Salzgitter plant for use from 2020 on Nürnberg S-Bahn routes S3, S4 and S5. DB is to operate the services for 12 years from December 2018 under a contract which was signed in January following a disputed tendering process originally won by National Express, which subsequently withdrew its winning bid which had included plans to order Škoda Transportation RegioPanter EMUs.

The 160 km/h Coradia Continental EMUs ordered by DB Regio will have 230 standard class seats, a toilet, power sockets, dynamic passenger information, CCTV and extending footborards to cover the gap between the train and platform edge. The units will work in pairs to provide increased capacity at peak times.

‘DB Regio Bayern has many years of experience with the use and maintenance of the predecessor Class 440, and is therefore well prepared for the new trains’, said Fritz.