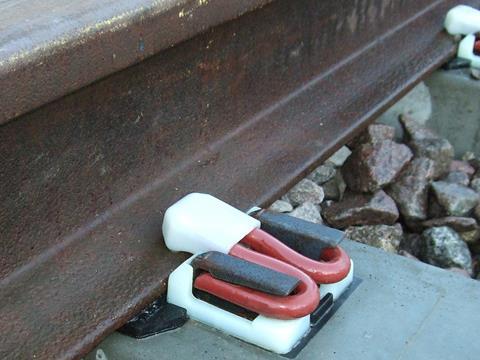 SWEDEN: Infrastructure manager Trafikverket has selected Pandrol’s Fastclip FE preassembled rail fastening and under sleeper pads for use as part of a 20-year framework contract for the supply of concrete sleepers.

The latest evolution of Pandrol’s elastic rail fastening is a value-engineered variant developed to reduce costs for infrastructure managers while enhancing performance and functionality. It can be used in all applications where Fastclip FC is currently deployed.

The components are delivered to site pre-assembled on the concrete sleeper. Once the rail is installed, the clip is pushed onto the rail by a simple drive action. This facilities the mechanisation of installation as well as extraction during maintenance and renewals, with machines developed by Pandrol company Rosenqvist being capable of installing up to 70 sleepers/min.

Pandrol CDM Track will be supplying the under sleeper pads, which it says can reduce of rail corrugation, especially on tight radius curves, and extend the grinding interval by at least a factor of two.