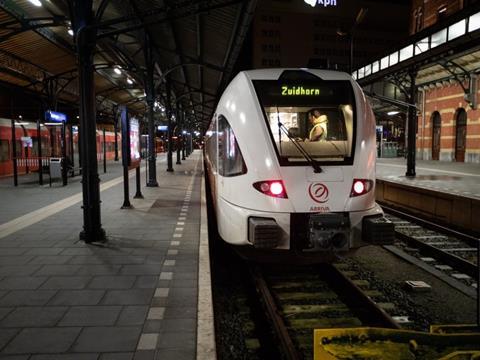 NETHERLANDS: ProRail, Arriva and Stadler have started a week-long trial of automatic train operation on the Groningen – Zuidhorn line in the north of the country, with a modified GTW DMU successfully undertaking a first run on the evening of March 15.

Operating in Grade of Automation 2, with a driver in attendance, the test train made automated stops at Groningen, Hoogkerk and Zuidhorn. The infrastructure manager reports that the initial tests were very successful, adding that ‘much has been learned from the data collected’.

With ridership on the Dutch network projected to increase by at least 45% by 2030, and freight volumes also rising, ProRail is looking for cost-effective ways to make better use of its existing infrastructure, which it had previously warned was ‘reaching the limits of maximum capacity’. According to CEO Pier Eringa, ‘to accommodate this growth, we need to innovate. As well as implementing ERTMS, ATO is expected to be one of the important innovations to provide more capacity without the costly construction of new tracks.’

ProRail anticipates that ATO will allow trains to operate at shorter headways and stop more precisely, supported by traffic management to co-ordinate the movement of trains. The acceleration, speed and braking of each train could thus be optimised to save energy. While the current programme is limited to GoA 2, future tests will look at driverless operation using GoA 3 and GoA 4.

In terms of punctuality, ProRail said 95% of trains currently arrive at Groningen within 140 sec of their booked time, but with ATO the margin could be improved to 55 sec. Tightening up the pathing allowances would release capacity for more trains or provide more room in the timetable for the operation of opening bridges or level crossings without impacting on train performance. Customers would also benefit, as the trains would be more consistent, the infrastructure manager suggested.

ProRail is also investigating the use of ATO on freight trains, having undertaken trials with a modified locomotive on the Betuwe Route in December, in conjunction with Rotterdam Rail Feeding and Alstom. This locomotive operated for around 100 km using ETCS Level 2.