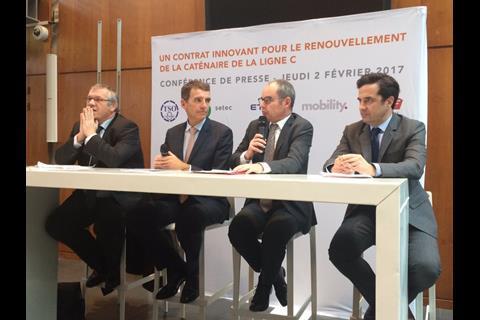 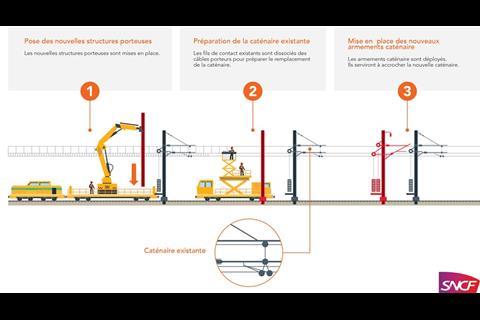 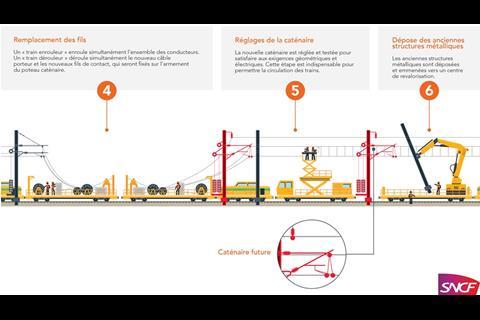 FRANCE: Infrastructure manager SNCF Réseau announced on February 3 that it had awarded its first design-build contract for catenary renewal.

Under a €277m deal signed the previous day, the RC2 consortium of TSO Caténaires, Setec Ferroviare and Vinci subsidiaries ETF and Mobility is to replace the 1·5 kV DC overhead electrification on Paris RER Line C between Paris and Brétigny, some of which is more than 75 years old.

Funded by SNCF Réseau as part of its master plan for investment in the Ile-de-France region, the work forms part of an extensive programme of infrastructure renewal on Line C, which has been underway since 2013.

The contract covers the section of Line C south of Bibliothèque François-Mitterrand station as far as the junction at Brétigny. It will see around 180 track-km of overhead line replaced along with 2 000 masts and 600 gantries. Around 540 km of new cables will be required. Installation is expected to begin in 2018 for completion by 2024.

The new ‘high performance’ OLE is being designed to withstand temperature variations over a range of 70°C, compared with 40°C for the current equipment. The renewal will also facilitate the operation of more frequent trains over the next 20 years to accommodate demand that has been increasing by an average of 3% per year.

The four partners will undertake the work using a fleet of purpose-designed high-output machines, which are expected to be capable of replacing up to 1·4 km of catenary wire in an overnight shift without disrupting the following day’s operations.

A first unit would install the new masts, while the second would have elevated platforms from which staff can dismantle the old contact wires. The third stage would install the new support arms and insulators, before machine four rolls out the new wires. Staff working on fifth unit with another elevated platform would then adjust the new catenary ready for use, while unit six removes the old masts. The project is expected to employ around 150 staff working for more than 1 million hours.