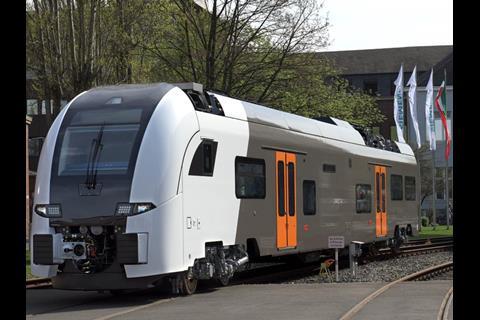 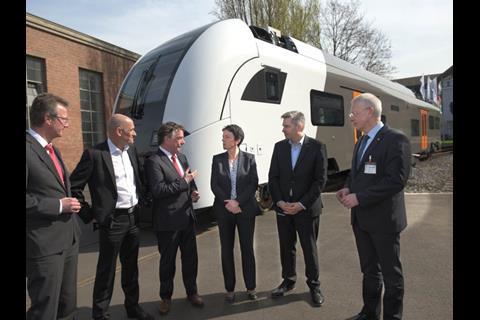 GERMANY: Siemens unveiled the first Desiro HC car for the future Rhein-Ruhr-Express network at its Krefeld factory on March 31.

‘The RRX will lift regional transport in NRW to a higher level’, said NRW Transport Minister Michael Groschek on his visit to Krefeld, adding that ‘the new trains combine comfort, capacity and performance.’

Siemens is supplying 82 Desiro HC electric multiple-units under a €1·7bn contract signed in March 2015. Testing of the new trains is expected to begin in mid-2018, with entry into service from December that year.

Each set will have two single-deck driving cars and two double-deck intermediate vehicles; most RRX routes will be operated by two sets in multiple. The planned service pattern would see a train every 15 min on the core route between Köln and Dortmund, going out to other main cities including Leverkusen, Düsseldorf, Duisburg, Bochum and Bielefeld.

The trains are to be tested at Siemens’ Wegberg track, and Siemens will maintain them for 32 years at a depot that it is building in Dortmund.