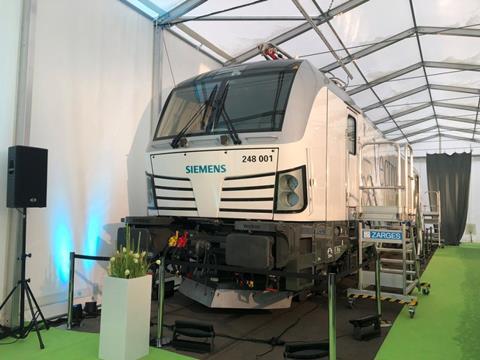 GERMANY: The first of two prototype Vectron Dual-Mode locomotives was formally unveiled at the Siemens Mobility plant in München-Allach on March 11.

Announced at InnoTrans 2018 last September, the 160 km/h Bo-Bo electro-diesel locomotive is intended to fill a gap in the Vectron range, and is intended primarily for freight operators. Following the roll-out, the locomotive was presented to potential customers by Siemens Mobility co-CEO Sabrina Soussan.

Designated as Class 248 under the German numbering scheme, the Vectron Dual-Mode is designed to take power at 15 kV 16·7 Hz when running on electrified lines. The 2 400 kW MTU engine for use on non-electrified routes is bigger than a ‘last mile’ powerpack, giving 2 000 kW of traction power at wheel.

The prototype locomotive is due to be displayed at the Transport Logistic fair in München in June, and the manufacturer anticipates that it will be authorised for revenue operation in Germany by the end of this year.