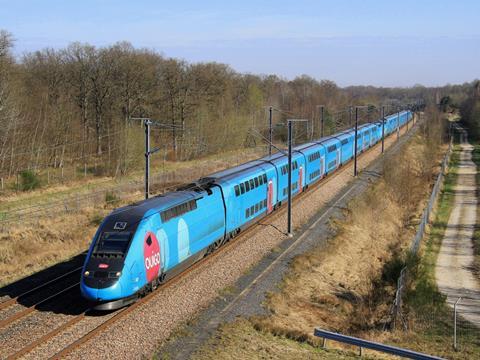 FRANCE: Originally envisaged for 2020, Ouigo low-cost high speed services between Paris and Toulouse are now to begin running on July 6. The SNCF subsidiary has announced that ticket sales for its first trains will open on March 26.

Ouigo will initially operate one train each way per day, calling at Agen and Montauban on Mondays to Fridays but running non-stop at weekends. The 08.38 departure from Paris Montparnasse and 13.48 from Toulouse will replace existing TGVs, with the low-cost trains effectively downgrading the current service provision on the route. Additional Ouigo services to Toulouse are to be introduced from the December 2019 timetable change.

This increases to 12 the number of destinations in southwest France served by Ouigo, which will be operating eight trains each way per day over LGV Atlantique. As well as the Toulouse service, the low-cost operator runs three trains/day to and from Bordeaux – two from Paris and one from Tourcoing near Lille. There are two trains/day between Paris and Rennes and two linking the capital with Nantes.

‘We are delighted to be arriving in Toulouse in the summer of 2019’, said Ouigo Director-General Stéphane Rapebach. ‘It is good news for our customers and a strategic step for Ouigo, which is strengthening its presence in the southwest two years after the conquest of Bordeaux.’

SNCF expects the introduction of base fares from €19 to attract an additional 300 000 passengers on the Toulouse route during 2019. According to SNCF Voyages Director-General Rachel Picard, Ouigo has made high speed travel ‘more accessible’ in its first five years, attracting an estimated 2·5 million extra passengers to rail during 2018.