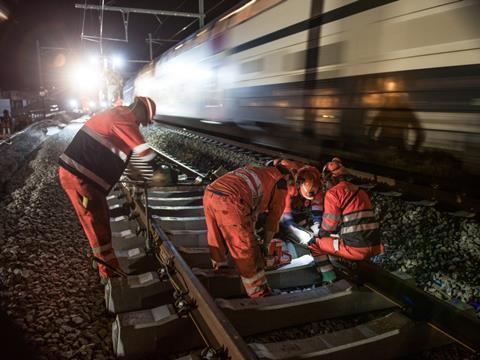 Worth SFr12∙89bn, the investment package known as STEP 2035 (Strategische Entwicklungsprogramm Bahninfrastruktur) covers around 200 large and small projects, on both the Swiss Federal Railways network and many routes operated by Switzerland’s ‘private’ railways. It will permit the introduction of half-hourly inter-city services on many routes, with Genève – Lausanne, Zürich – Bern and a number of regional and S-Bahn services becoming quarter-hourly.

Major projects include a direct link from Neuchâtel to La Chaux-de-Fonds via Cernier, the 9 km Brüttener tunnel to give more capacity between Zürich and Winterthur and the 11 km second Zimmerberg tunnel on the Zürich – Luzern route. The programme as now authorised includes several schemes that were excluded from the STEP 2035 consultation paper published in 2017, one of which is completion of the second track through the Lötschberg base tunnel which was only partly fitted out when it opened in 2007. This will permit half-hourly inter-city services from Bern to Brig and Interlaken and allow all freight trains to be routed through the base tunnel.

Other schemes include 14 new stations, of which seven will be on the SBB network. Improvements such as additional pedestrian subways and longer, wider platforms will be made at 10 major or medium-sized SBB stations.

Freight traffic is set to benefit from the introduction of ‘express paths’ on eight key routes including Basel – Olten – Bern, Bern – Lausanne, Solothurn – Lausanne, Zürich – Chur and Zürich – Lugano. Additional freight paths will be made available on seven routes, and capacity for freight trains during peak periods will be ensured in the Zürich area. New freight operating facilities will be provided in the northern part of the Vaud canton, in the Broye area near Fribourg and at Dagmersellen, Thurtal West, and in the cantons of Graubünden and Ticino.

STEP 2035 is based on government forecasts that the Swiss rail network will be carrying almost two million people a day by 2040, around 50% more than now. The volume of rail freight is also expected to rise by around 45%. Funding will be made available from the government’s Railway Infrastructure Fund, which is sourced from various taxes including VAT and a levy on heavy goods vehicles.

A number of projects favoured by the cantons and planning bodies remain under discussion, including the long-planned through station in Luzern and the tri-national S-Bahn project in Basel. These schemes may be included in a further phase of the government’s railway infrastructure programme, which could be laid before Parliament by 2026.