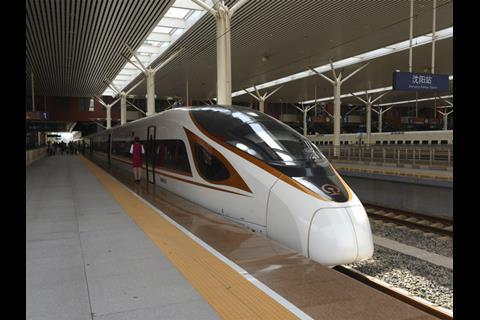 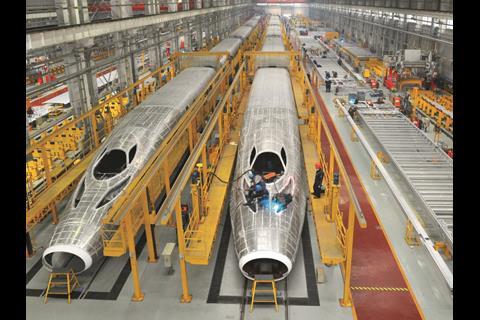 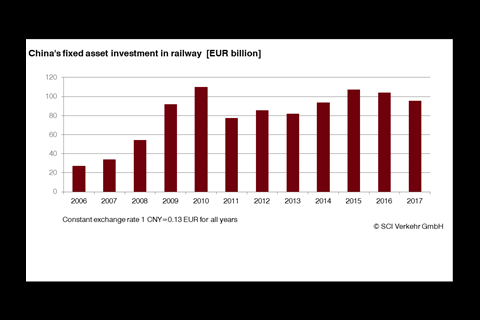 CHINA: While the demand for railway technology is expected to continue at a high level for the next five years, the Chinese market has lost momentum and is not expected to grow, according to a new study by German consultants SCI Verkehr. This may put pressure on Chinese suppliers to focus more on winning export business.

In its analysis of the Chinese railway market, SCI Verkehr looks at current plans and development targets, as well as the level of orders for technology and services. Estimating the total market value at around €34bn, the consultants predict that this will grow by just 0·6% between now and 2022.

Over the past decade, China has evolved into the largest and one of the most dynamic railway markets in the world, with huge levels of investment going into the rail sector, notably in the development of a high speed network now totalling 29 000 route-km. According to China Railway Corp General Manager Lu Dongfu, 4 368 km of new railway opened during 2018 alone, taking the total length of the network to 131 000 km, and another 6 800 km is predicted to open during 2019.

In the early days, China’s expansion drive relied on a high degree of imported technology, but domestic manufacturers have become increasingly self-sufficient in many sectors. SCI Verkehr reports that expenditure on railway technology peaked at almost €120bn in 2010 and 2015, thanks to government economic stimulus plans. Since then, it finds that ‘a certain level of saturation has been observable’, with investment levels declining slightly although still remaining at a high level overall.

The study reports that substantial investment is being made in new rolling stock for delivery 2018-20, with around 900 high speed trainsets, 4 000 locomotives and 210 000 freight wagons to be procured over the three years. However, SCI Verkehr estimates that this sector of the market will decline at a cumulative rate of around 3·4% per annum after 2020, ‘mainly due to decreasing procurements in the high speed segment’.

The decline in procurement of new vehicles will be offset by dynamic growth in after-sales business. This is expected to increase at 7·1% per annum, thanks to increasing demand for spare parts and maintenance of the huge fleet and expanded rail network.

SCI Verkehr warns that decreasing demand for new procurement raises the risk of ‘significant overcapacity’ for Chinese manufacturers in the medium term, notably at the three large state-owned enterprises CRRC (rolling stock), CRCC (construction) and CREC (engineering). The report suggests that the companies will look to offset this by playing a bigger role in the domestic maintenance market as well as a stronger focus on international exports.

Although all three groups have been able to secure contracts ‘in almost all regions of the world’ over the past few years, SCI Verkehr finds that Chinese suppliers ‘are still are not of key significance in larger regions such as Europe, North America and the CIS’. The overcapacity challenges at home could be starting to change that.