First Hitachi IEP trainset sets off for the UK 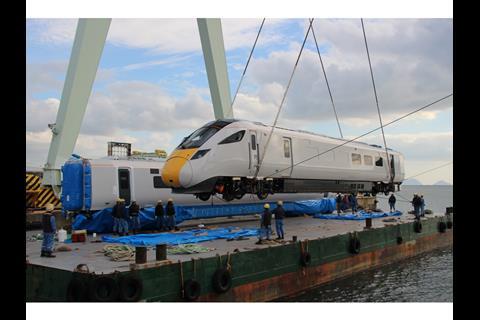 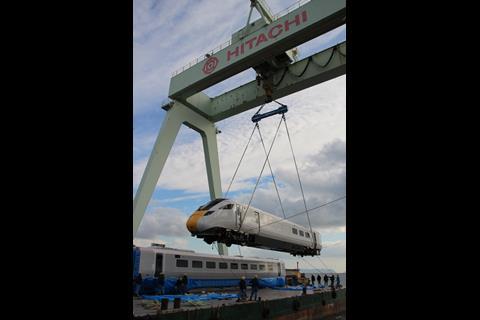 UK: The first pre-series Class 800 trainset ordered under the Intercity Express Programme left Hitachi’s Kasado plant in Japan on January 7 for delivery to the UK. It is scheduled to be shipped from the port of Kobe on January 22 and arrive in the UK in March.

The five-car electro-diesel trainset will be fitted with measuring systems for running tests to be undertaken on the East Coast Main Line by Hitachi Rail Europe, which will enable acceptance of the trainset by Agility Trains, the special-purpose company that will own the IEP trainsets and provide them to the Great Western and InterCity East Coast franchisees. The pre-series trainset will also be used for staff training.

‘After unveiling this train in November last year, I am immensely proud that we today see the first shipment leave our factory in Kasado’, said Alistair Dormer, Global CEO of Hitachi Rail. ‘Our engineering teams in the UK and Japan have been working exceptionally hard with all stakeholders to ensure that this train will be ready for testing in the UK from April this year onward.’

A total of 12 trainsets are to be built in Japan, including two five-car and one nine-car pre-series trainsets, before assembly switches to Hitachi Rail Europe’s £82m plant under construction at Newton Aycliffe in northern England. This is scheduled to be completed in summer 2015, with the recruitment of 730 staff underway and production to begin in 2016.