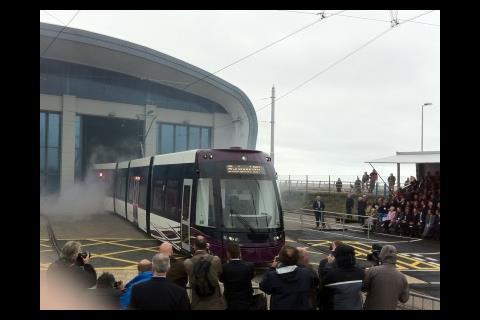 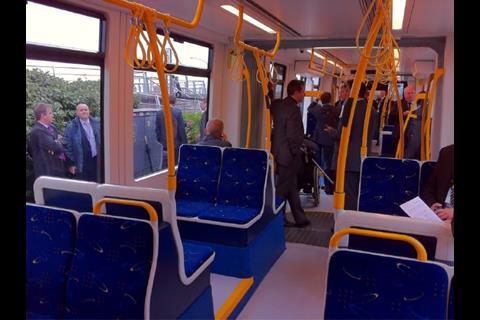 UK: Bombardier Transportation launched the first of its Flexity 2 trams in the seaside town of Blackpool on September 8. It is the first of 16 ordered by Blackpool Council in 2009 as part of what Lancashire County Council’s Director of Transport & Strategic Highways, Mike Kirby, describes as a £100m ‘rebirth’ of the town’s 125-year old tramway.

The latest addition to Bombardier’s family of low-floor trams ‘combines proven technology with continuous innovation’, according to Bombardier Transportation President André Navarri. It is an evolution of previous designs, incorporating successful features from the 3 500 light rail vehicles which Bombardier has supplied to 100 cities in 20 countries.

New features include touch-screen controls for the driver. The outer shell of the cab can be specified by the customer, enabling cities to choose their own front end. The interior is designed as an ‘empty room’, which can be fitted out however the customer wishes; the second customer for Flexity 2 is the Gold Coast light rail project in Queensland, Australia, where 14 longer cars are to be supplied with space for surf boards.

The northern resort of Blackpool is home to the UK’s only surviving first-generation tramway, an iconic part of the town’s attractions. But by the early 2000s it was clear that modernisation was needed, and the effects of an aging population and impending legislation on accessibility meant that traditional high-floor trams could not continue in service indefinitely. ‘If we didn’t secure major investment it would wither and die’, said Kirby.

But ‘Blackpool continued to keep its faith in this method of transport’, according Simon Blackburn, Leader of Blackpool Council. There had been talk of reducing the line to a short tourist attraction in the town centre, but government funding was secured to cover most of the cost of a £100m programme which Kirby says will ensure the line between Blackpool and Fleetwood provides an economic boost by enabling residents to access jobs and services.

Procurement followed a traditional model, with the UK Department for Transport providing funding and Blackpool Council purchasing the 16 vehicles for £33m. DLA provided specialist legal support to the council.

The trams are being assembled at Bautzen in Germany, with significant input from Bombardier’s plant in Wien. Following commissioning, the new trams will enter service at Easter 2012, when a new timetable based on 10 min headways is due to be launched.

As well as the new vehicles, the investment programme includes a major rebuild to bring the route up to modern light rail standards. The number of stops is being reduced from 64 to 37 to enable the trams to offer competitive journey times, with the remaining stops rebuilt to provide level boarding.

The traditional double-deck trams are seen as an iconic part of Blackpool and will continue to operate through the town centre. Around 10 are being adapted to meet accessibility requirements, but the most historic vehicles will be kept as a museum fleet. The introduction of new vehicles means the double-deckers are ‘no longer old trams, they are heritage trams’, according to Blackburn.

The new cars will be housed in a purpose-built depot at Starr Gate, constructed by VolkerFitzpatrick. Design has been informed by the TramStore 21 project, which has compared experience across Europe to improve efficiency.

Operating along the seafront, Blackpool’s trams can be exposed to harsh maritime conditions. The depot has marine-grade coatings and an aluminium roof to minimise corrosion, while the trams will be kept indoors and washed every day. The new depot is in a prominent location at the southern end of the seafront promenade, and features an external LED display designed to harmonise with the town’s famous illuminations.

The depot has three maintenance roads, one of which is equipped with Eurogamma jacks. An important feature is the Hegenscheidt wheel lathe which will be able to turn all the wheels of a Flexity 2 tram in a day.