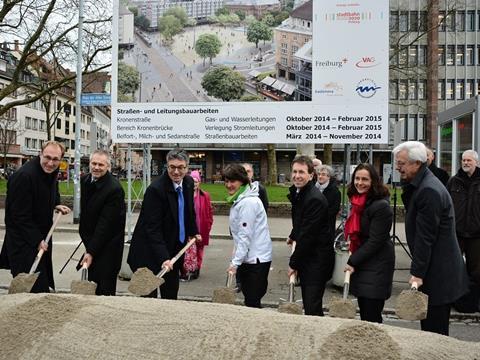 GERMANY: A groundbreaking ceremony took place on January 15 for the Rotteckring tram extension in Freiburg.

The 1·9 km extension is to branch off the existing Route 2 at Siegesdenkmal and run south to Kronenstraße, with five stops. The first phase, to Stadttheater, is due to open in 2017, with the whole extension completed the following year.

The project is receiving €23·5m in federal funding and €9·8m from the Land of Baden-Württemberg. Around €9m is being spent on the demolition and reconstruction of the Kronenbrücke bridge over the River Dreisam, which is due to begin next month.

The tram route will be laid in the road median strip and forms part of a larger project to relandscape the area around Rotteckring.