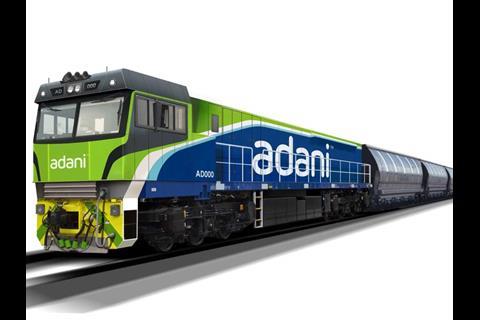 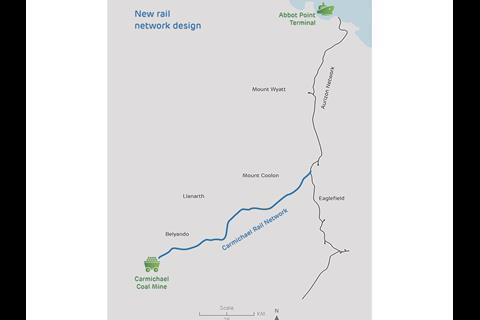 AUSTRALIA: In a bid to reduce the capital cost of its controversial Carmichael opencast coal mining project in Queensland’s Galilee Basin, Adani Mining announced on September 12 that it had dropped plans to develop an independent standard-gauge railway in favour of a 1 067 mm gauge connection to Aurizon’s existing Newlands – Abbot Point line.

The decision would reduce the length of new line from 388 km to around 200 km. The revised proposal follows the same route as previously envisaged as far as a connection to Aurizon’s Northern Missing Link near Leichhard Range, 5 km south of Newlands Junction and 177 km from the heavy haul terminal at Abbot Point.

Describing the change of plan as ‘a practical and cost-effective solution’, Adani Mining Chief Executive Lucas Dow said it would ‘accelerate the delivery of the project and reduce capital costs’. This would allow the new mine to ‘deliver coal more quickly to the countries in Asia with high-energy demand’ and generate economic benefits for Queensland.

Switching to narrow gauge would reduce the planned train size from 220 wagons to 120 wagons, hauled by three locomotives. Maximum speed for loaded trains would remain 80 km/h, while empty trains would also run at 80 km/h instead of the 100 km/h previously proposed. Nevertheless, Adani believes the scaled-back rail connection could still handle the projected production output of 27·5 million gross tonnes a year, within the authorised 40 million tonnes for the first phase of the mining project.

Dow indicated that Adani would be willing to allow other operators to make use of its new line to serve other potential mining projects in the Galilee Basin. While Aurizon is understood to support the change of strategy, local media report that Adani has not yet lodged a formal access request to use the Newlands network.