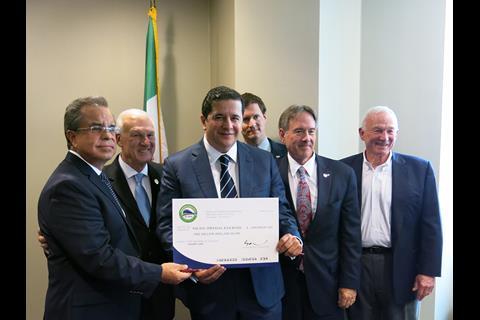 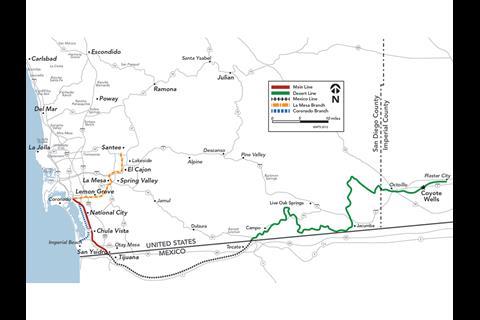 NORTH AMERICA: An agreement to fund infrastructure rehabilitation and the revival of freight services on the 110 km Desert Line, in order to connect manufacturing facilities in northern Mexico with southeastern San Diego County in the USA, was announced by Pacific Imperial Railroad and Baja California Railroad on June 9.

San Diego Metropolitan Transit System has owned the Desert Line since 1979, and it approved a lease agreement with PIR in 2012. Since January 2013 PIR has been negotiating an operating agreement with Baja Rail, which runs services on the Mexican section of the route, and a memorandum of understanding was signed on June 22 2015.

A sublease agreement signed on June 2 2016 will see Baja Rail fund the estimated US$60m to US$70m cost of work to repair 57 bridges, 17 tunnels and track on the 96 km between Tecate on the US/Mexico border and Coyote Wells. Work is expected to begin this summer.

Trains of up to 30 wagons will run from Mexico to a new intermodal facility which PIR is to build in Coyote Wells, where they will be assembled into 100-wagon trains for transfer to Union Pacific in Plaster City. Freight is expected to include automotive traffic.

MTS will retain ownership and oversight of the line, and has appointed RailPros as its expert consultant. MTS will continue to earn $1m a year from the lease, plus 7% of any gross revenue above US$1m.

The agreement to revive the line ‘is a historic win for the San Diego region’, said MTS Vice-Chair Ron Roberts. ‘An operational Desert Line will help reduce vehicle emissions at the border and help this region meet its emission reduction goal.’