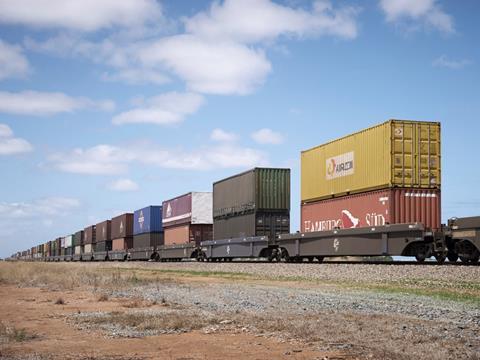 AUSTRALIA: Aurizon Holdings Ltd has reached a revised agreement to sell its Queensland intermodal freight business to the Linfox logistics group for A$7·3m, the freight railway operator reported to the Australian stock exchange on October 12

Aurizon had announced its intention in August 2017 to withdraw from the intermodal market, and it closed down its interstate operations at the end of the year. It had signed a binding agreement last year to transfer the residual Queensland intermodal activities to a consortium of Linfox and Pacific National, but the deal was subsequently blocked by the Australian Competition & Consumer Commission.

In July, ACCC launched an action in the Federal Court, suggesting that Aurizon and Pacific National had conspired to stifle new entrants to the rail market. That case is scheduled to be heard on November 19. ACCC Chairman Rod Sims said the commission had been ‘aware of at least one alternative purchaser’ able to acquire Aurizon’s ‘entire remaining intermodal business’, but Aurizon insisted on October 12 that Linfox had put forward ‘the only stand-alone, binding bid’.

Under the revised agreement, Linfox will acquire Aurizon’s intermodal rolling stock, freight forwarding and drayage assets, along with its customer contracts and terminal access agreements. This would include the Acacia Ridge intermodal terminal near Brisbane, which Aurizon says it is still committed to selling to Pacific National for A$205m. Around 190 railway employees would also be transferred to Linfox.

The two companies have agreed a separate 10-year ‘take-or-pay’ deal under which Aurizon’s Bulk business will provide rail haulage and terminal services to Linfox using its own locomotives and employees.

‘This significant acquisition will strengthen the Linfox network and increase competition in the Queensland logistics market’, said Linfox Executive Chairman Peter Fox. ‘It will also bring certainty to Aurizon staff, regional communities and customers that would have been impacted if the Aurizon business had closed.’

Linfox Logistics Chief Executive Mark Mazurek said the company was looking to providing a ‘new and compelling’ option for businesses serving northern Queensland, adding that ‘we understand the strategic importance of this region’. He felt that the deal would ‘unlock significant value for our current and future customers’.

Completion of the transaction is subject to the Federal Court lifting an interlocutory injunction which requires Aurizon to continue operating the Queensland intermodal business pending the resolution of the ACCC challenge.