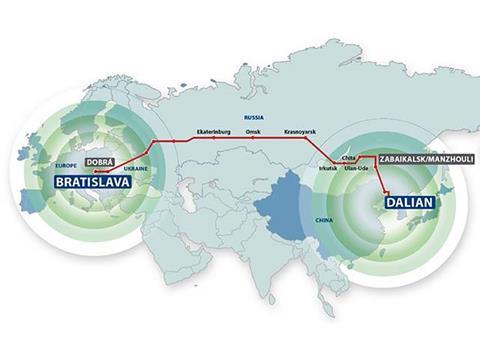 INTERNATIONAL: A trial container service from Dalian in China to the SPaP port on the River Danube in Bratislava arrived in the Slovak capital on November 13, after a 17-day journey via Russia and Ukraine.

The 41 containers carrying goods worth more than US$3m including electronics and machine parts were transhipped between gauges at the Manzhouli/Zabaykalsk crossing between China and Russia and at Dobrá on the Ukraine/Slovakia border, where the freight facility has two gantry cranes and a transhipment capacity of up to 200 000 containers per year.

A weekly service is planned from January, increasing to twice per week in the second half of the year. The government envisages that up to 2 000 services from China could use the Slovak network each year by 2020.

Slovakia’s Minister of Transport & Construction Arpád Érsek said delivering containers from China to the country was ‘a huge success and a great business opportunity’, as its national network’s capacity is ‘far from fully utilised’ at present.

Dana Meager, State Secretary at the Ministry of Finance and responsible for Slovakia’s relationship with China’s Belt & Road Initiative, said that the development of trade along modern ‘silk road’ routes was an important pillar of plans to develop the national economy.